An uplifting and inspiring story of one young man’s determination! 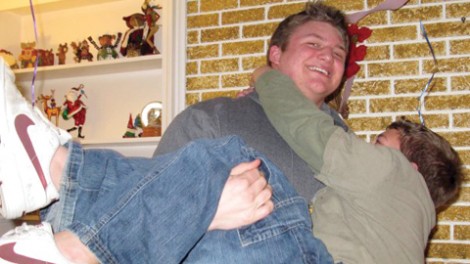 By ERIC A. HOWALD
Of the Keizertimes

The minute he stepped outside the multiplex, David Blake’s driving emotion was anger – at his mom.

“My first thought was that she needed to chill out,” Blake said. “She knew I was going to the movie and I didn’t understand why she would she call me eight times, text 10 times and leave four voicemails.”

Blake’s mother told him something bad had happened to his brother, James “Tino” Mattiazzi. Get home as soon as possible, she said, but don’t speed. He hung up the phone and stood straight as possible, shaking. He describes the ride back as though it was happening in slow motion.

“I knew he had died. I was trying to talk myself out of thinking it with my friend, but I knew just as sure as I did that something horrible had happened,” Blake said.

His mother and a neighbor met him in the front yard with confirmation of his fears, Tino had died of self-asphyxiation.

“My first reaction was I thought she was trying to trick me. I asked her to repeat herself,” Blake said. She did. Blake felt his knees give way and his mind go blank. “I became blind for several minutes. All I could do was scream, clenching my mother’s legs.”

The days that followed were a rollercoaster of conflicting emotional turmoil. There were suggestions that Tino had been playing a “choking game” that went too far and quieter ones that there was more intention to Tino’s actions that night. Blake mourned them all anew and in different ways. He didn’t get a chance to see the police report on his brother’s death until two weeks ago, it confirmed what he mostly suspected from the night he got the news.

Blake and Tino were actually cousins. Tino became an adopted brother when Blake’s mother took him in, but their close relationship predated the adoption. Blake was the one to teach Tino how to ride his bike. Tino was into collecting rocks at the time and Blake dutifully doled them out each time Tino met a goal. During summers together, the pair would ride their bikes to Mission Lake with a rubber raft in tow and spend the day fishing “even though there’s nothing to catch in that lake,” Blake said.

They bonded, too, over the tumultuous home life each had experienced growing up and the difficulties it led to in school. While a suicide can rarely be ascribed to a single incident, Tino’s actions took Blake by surprise. The week it happened, Blake said Tino seemed happier than he had in the weeks prior.

The day after his brother’s death, the day of the 2010 Keizer Iris Festival parade, Blake went to breakfast with his friends and things began to feel somewhat normal again, but then he went to McNary High School to get his trumpet. He didn’t plan on playing with the band as they marched in the parade, but David Hodges, the McNary band director, encouraged him to join the group.

“Telling Mr. Hodges what happened was one of the hardest things I’ve ever had to do, but he thought playing might be a good idea,” Blake said. Since that time, music has become a comfort for Blake and he begins studying to be a music teacher this fall at Western Oregon University.

In the immediate aftermath, Blake and his sister decided they wanted to do something to raise awareness about issues revolving around teen bullying, neglect, and abuse and the various routes to teen suicide, but it wasn’t until he joined the Celts’ Hands and Words are Not for Hurting class, that his path became clear.

Blake doesn’t remember when he first heard about the Hands and Words class, which makes anti-bullying activism part of the curriculum, but he knew immediately that he wanted to be part of it. “I just knew I would make room,” he said.

The first day he sat down in the band room for class, teacher Jim Taylor encouraged all the students to think deeply regarding their reasons for being there. Blake took the assignment to heart and wrote the following later that night: “This class gives me a chance to help stop bullying that I should have guided my little brother through before he killed himself. It gives me a chance to make up for the mistakes I made and make my little brother proud.”

As part of the class, Blake became more accustomed to sharing his and Tino’s story and has tried his best to lead by example.

“I want people to see what I do and how I act on a good day. I want them to take something positive from being my friend and change the world or their community,” he said. “I have a feeling that there may be more than one little brother out there with the same feelings as Tino, so I challenge any big brothers or sisters to talk and express your true feelings with each other before it is too late.”

By all indications, his message isn’t being missed. As Blake graduated from McNary last month, many of the Celtic underclassmen were coming up and telling him what an inspiration he’d become for them.

He’s not sure exactly what his future holds at the moment, he likes the idea of teaching at a high school and forming a club that will do for other students what Hands and Words did for him, but he remains deeply committed to continuing what he’s started by sharing his story.

“I am still overwhelmed with the little difference I have made, so I am starting to think bigger,” Blake said. “I want people to know that I stand for hope and I do not accept abuse. The world can be cruel, but every teen should have a place to go for recreation, if that’s sports, great, but maybe it’s art club or band and choir. When teens have nowhere to go and no one to talk to that is where the problems are. We need to fund programs that keep kids hopeful, because sometimes there is no hope left in their homes.”

Earlier this year, Blake made a video (left) detailing the reasons he joined the Hands and Words class. Blake’s journey to this point is summed up in a picture that appears at the 2:13 mark: Blake, who stands about 6-foot-2 and isn’t what anyone would consider a physical pushover, smiles into the camera as he hoists Tino, growing up in the mold of his brother, into his arms. Tino grabs onto Blake’s neck with a smile in his eye and holds on for dear life. Tino is gone, but his big brother is still carrying him.